BBQ Shrimp was born at Pascal Manale’s restaurant on Napoleon Avenue in 1953. Today, it is one of the world’s most replicated New Orleans dishes. Do not confuse it with traditional BBQ—Pascal Manale BBQ Shrimp has very little to do with that.

There is no grill, no skewers, and no coals. Just a simple combination of lemon, spices, Worcestershire sauce, and a generous helping of butter. BBQ shrimp is a perfect appetizer, a rich and delicious dish for a weeknight dinner.

The best part? You can make this restaurant-style side at home with our most straightforward Pascal Manale BBQ Shrimp recipe.

The most essential ingredient in the Pascal Manale BBQ Shrimp is the shrimp with the head-on since it contains the fat, protein, and flavors that make the most of your BBQ shrimp.

Furthermore, using unpeeled shrimp is a must. It simply won’t be that good with the peels removed. Plus, the shells help to keep shrimp tender and moist.

However, finding fresh shrimp might not be accessible unless you live near the coast. In this case, refer to the frozen shrimp and defrost it yourself.

With no further ado, let’s cover the rest of the ingredients you’ll need for this iconic BBQ Shrimp.

The most important thing about this Pascal Manale BBQ Shrimp is the sauce it will cook with. You’ll need lots of it and lots of French bread to mop it up. You can’t avoid getting your fingers messy and greasy since this BBQ Shrimp is—literally—finger-licking good.

But note that this is a somewhat salty dish. So, opt for the reduced-sodium Worcestershire. Otherwise, if you want more heat, add a little extra cayenne pepper or Tabasco. Apart from that, there are no secrets to making Pascale Manale BBQ Shrimp. It is effortless.

Before we get to the cooking, wash the shrimp and pat them dry.

Get the dried shrimp in a large bowl and add the garlic, salt, cayenne pepper, Worcestershire, and Tabasco sauce. Also, shower it with some pepper and paprika.

Give the shrimp a good mix of spices and pour olive oil into the bowl. Add white vinegar at this step too.

Add a big pat of butter to a frying pan over medium-high heat and let it melt. Once the butter melts, add your marinated shrimp and cook it until done.

Sprinkle some oregano over the shrimp, and remember to shake the pan gently not to overcook the shrimp constantly.

Take the soup bowl and serve your shrimp along with some bread. But note to pour the sauce into the bowl before serving and sprinkle basil over it.

Pascal Manale BBQ Shrimp will turn out so tasty and savory that you will hardly want to change anything about it. However, you might need to tweak the recipe a little for dietary requirements or personal preference purposes.

We’ve got just the correct replacements.

If you don’t like Tabasco or don’t have any on hand, you’ll probably find plenty of Tabasco sauce substitutes. However, nothing does a better job than the Sriracha sauce. It provides many of the same benefits as Tabasco, but is more exciting.

Moreover, Sriracha is made of fresh ingredients and has more health benefits and flavor.

What to Serve with Pascal Manale BBQ Shrimp

Whenever you cook this heavenly delicious BBQ Shrimp, you’ll go for nothing else. Serving it with French bread makes it irresistible and quite filling.

However, consider these dishes if you’d like to enjoy them with something light on the side.

Every seafood entree works well with some steamy white rice, but why not make it a little more exciting? Instead of plain rice, take it to the tropics by adding lime. Lime rice with the savory shrimp will be a combination for your next gathering.

Plus, both are simple to make, bursting with flavor and personality.

A picnic classic potato salad will go great with this one-of-a-kind BBQ Shrimp. You can prepare both beforehand and enjoy chilled while on a picnic. Sounds like a dream summer treat.

Mix some colorful bell peppers and celery with the creamy dressing to complement your tasty shrimp.

Besides all the benefits and excellent taste the Pascal Manale BBQ Shrimp provides, it is also super easy to reheat. Unlike the peeled shrimp, it would be hard to overcook it. That being said, there are 3 different reheating methods you can use.

In this case, a microwave is a fast but rather inconvenient way to reheat shrimp. Pascal Manale BBQ shrimp is cooked in a sauce, so you have to reheat it in a microwave-safe bowl for about 1-2 minutes.

As in plenty of other dishes, the best way to reheat this one is following the way it was cooked—in the skillet. Just place your shrimp and the sauce in the skillet over medium heat and cook for about 2-3 minutes, stirring occasionally.

Reheating BBQ shrimp in an oven is uncommon but possible. However, you’ll need a casserole dish for that. Preheat an oven to 300-350°F and reheat your BBQ shrimp for 5-7 minutes.

Considering this BBQ Shrimp recipe is that good, we doubt you’ll have any leftovers. But if you’ve made a large batch, you can’t finish, store it in the fridge or freezer to enjoy for days to come.

BBQ shrimp stays perfectly in the fridge if you store it in an airtight container wrapped in plastic wrap. That could keep it for up to 4 days. But note that it shouldn’t be held for longer than that.

The sauce makes this BBQ shrimp unsuitable for storing in the freezer. But if you have to, use freezer bags only after you put your shrimps in the freezer on a baking tray to become firm first. Then, once you’re ready to enjoy them again, whip up some fresh new sauce. 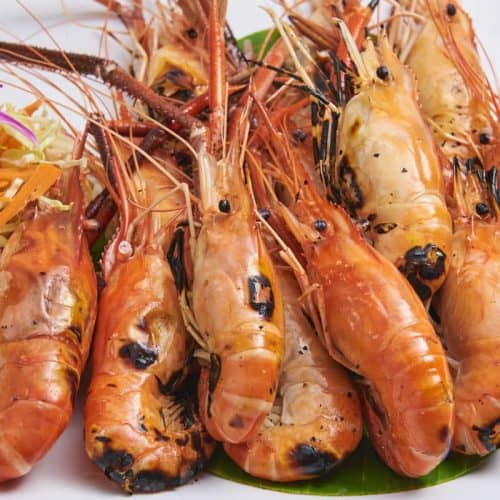 Pascal Manale BBQ Shrimp recipe will get you in the warm coastal mood of New Orleans wherever you are. It is a spicy and garlicky appetizer that comes together in minutes. Serve it with the sauce it’s been cooked in and some crispy French bread. It won’t disappoint you.
4.91 from 11 votes
Print Recipe Pin Recipe
Prep Time 6 mins
Cook Time 12 mins
Total Time 18 mins
Course Appetizer
Cuisine American
Servings 6
Equipment
Ingredients
Instructions
Liked This Recipe?Check Out All The Others We Have ➜