Juan Pollo is well known for its Mexican-style rotisserie chicken which is often served with a host of delicious entrees and sides.

One of their most popular sides is their famed potato salad, which is a simple and delicious vegetable dish that is guaranteed to enhance whatever you serve it with.

It’s made with mayonnaise, vinegar, and cream mixture served over some delicious sliced potatoes and onion. It pairs exceptionally well with pretty much anything else on their menu whether it be a taco, burrito, or their numerous chicken dishes.

So today we’re going to show you how to make a Juan Pollo Potato Salad at home, so you can always whip up this fantastic side to enhance any meal you want to serve it with.

This potato salad is made using extremely simple ingredients and, aside from boiling the potatoes, takes little to no time at all to prepare. It’s a great side to prepare in bulk too, as you can easily refrigerate it for later.

The only hot cooking involved in this recipe is the potato boiling to soften them. After that, it’s just a case of mixing everything together.

Because all the ingredients used are fairly basic, it’s a very adaptable meal meaning you can add all manner of different vegetables and seasonings at your leisure to make it more interesting. Don’t be afraid to get creative with it and use whatever you have laying around your kitchen!

Start by heating some water in a large pot, and add some salt to the water.

Whilst the water is heating, wash and then peel the potatoes and add them to the water. They should boil in roughly 15-20 minutes depending on their size.

A useful trick to tell if they are done is to pierce them with a fork, if it enters without resistance you know it’s done. If the fork gets stuck then give it a few more minutes.

Drain the potatoes. Then, after they have cooled a bit, slice them into quarters and place them at the bottom of the desired serving dish. If you are in a hurry you can rinse them under cool water to make them easier to handle.

Now we can make the salad. Using a bowl, mix the chopped onion with the parsley, mayonnaise, and then a little salt and pepper.

Gradually add the cream and vinegar while stirring to soften the mixture.

Once that’s ready simply pour the mixture over the potatoes and leave it to settle for a few minutes. It’s now ready to serve!

Because we are just using fairly basic ingredients, we’re spoiled for choice when it comes to great alternative ingredients to use in our salad. Whether you are looking to include a specific vegetable or just want to shake the dish up a bit, this dish is ripe for experimentation.

If you’re not keen on the potato, cauliflower makes a fantastic alternative. It’s fairly similar in taste and texture, plus it is also much lower in carbohydrates making it a far healthier option!

You can use it as a 1:1 replacement for potatoes and cook it up in the exact same way. Or if you really want to bulk up the meal, put them both together and make something really filling!

By exchanging the potato for pasta, we’ve just changed the dish entirely, but if you’re not in the mood for potato this is a fantastic option as you will still boil the pasta much in the same way you would the potato.

And this also leads to the following suggestions as pasta pairs exceptionally well with the next few items we will list.

If you need a good source of protein that’s as quick to prepare as the salad itself.

Shrimp is fantastic as it can be cooked in just a couple of minutes (you can also cook it from frozen which is a big bonus). It also won’t make the meal too heavy which makes it great if you want to pack it up and take it with you for lunch.

It’s much higher in vitamin A and is less likely to make your blood sugar spike, meaning it will provide you energy at a steadier pace throughout your day.

What to serve with Juan Pollo Potato Salad

Depending on what size of salad you make, it can be used as a main dish or as a side. The only thing that differentiates them is how much of the potato salad you make to call it a side or a main.

In general, a great source of protein complements a salad to both bulk the meal up and give it some of that nutrition that’s lacking due to the carbohydrate-heavy potatoes.

Grilled and seasoned chicken is an exceptional choice to pair with a potato salad. Firstly because it won’t weigh the meal down, having one of the lowest amounts of fat content of any meat out there and it’s also bursting with healthy protein.

Secondly, you can shred the chicken with a fork after cooking and throw it straight in the salad bowl, and then just eat everything together.

Depending on how you season the chicken it will not overpower the taste of the potato salad, only add some additional bulk and nutrition to it.

The reason why hamburgers and potato salad make such a great pairing is they are often both found at backyard parties and are very commonly eaten together. So it’ll be a familiar pairing to whoever you are serving the meal to.

Much like the chicken, grilled fish is a great healthy addition to your potato salad, rounding it off nutritionally with some extra protein. Plus, you can treat it as kind of a blank canvas to add your own seasonings onto to customize the flavor to your preferences and mood.

Salad can easily be kept nice and fresh in the refrigerator, but did you know you can actually freeze it for longer periods and it’ll defrost to be every bit as delicious as when you put it in?

This is perfect if you want to make the recipe in bulk and keep some for later, you can just squish them into freezer bags and let them defrost a few hours before you need them!

Store in the fridge

Simply grab a suitable airtight container, or if you use a salad spinner and have the room you can just use that, then refrigerate. Once stored it should last for up to five days.

Pro tip: if you want to keep your salad fresh for longer you can line the bottom of your storage container with wet (not sopping, just damp) paper towels which will help to keep everything fresh for longer!

Store in the freezer

Using some suitable freezer-safe bags, place all of the potato salad inside and squeeze out as much of the air as you possibly can before freezing. Once frozen it will keep for up to 3 months. 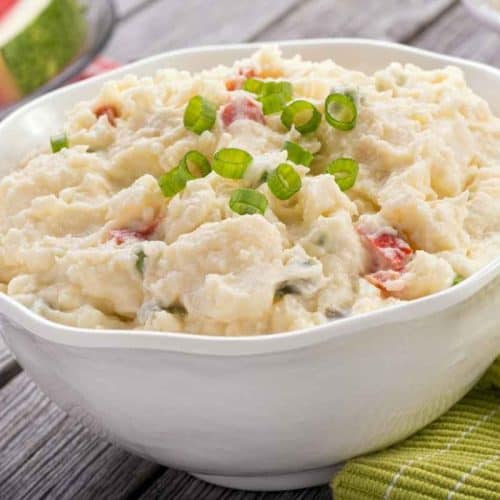 Passionate chef, in love with everything related to food and cooking it to perfection!