KFC is known for its savory chicken bites presented in multiple different ways. However, we think their gravy doesn’t receive the attention it should.

KFC gravy tastes like a magnificent elixir sent to us from heaven. Plus, it is dead-easy to make. And while other recipes you’ll find on the web claim to be the one closest to the heavenly original, none fits.

Luckily, you’ve landed here since we’re going to whip up the best gravy you’ve ever tasted. It is as close to the KFC Gravy as possible since we won’t use any canned beef or ready-made dressing.

How to Make KFC Gravy

If you’re a fan of the delicious KFC gravy, you will find it much easier to whip one out at home in a matter of minutes.

This KFC gravy recipe will give you all the necessary tips and tricks to make a life-changing gravy using just 5 simple ingredients you probably already have in your pantry.

Using a ready-made gravy to arrive at another gravy variation would be unreasonable. Moreover, this recipe will cost you even less if you make it from scratch.

So, let’s see what you’ll need for a perfect KFC Gravy.

Although the KFC’s Gravy recipe is closely guarded, we’ve created a spot-on imitation that tastes and smells just like the original. Trusts us on this one.

While most recipes feature bouillon cubes, both beef, and chicken, we’ll be using the liquid broth instead.

It makes a huge difference—not only because of the high sodium level the bouillon cubes contain but also because the real broth makes it taste authentic and deep in color.

We use onions and garlic powder instead of salt to amp the flavor of the gravy. Besides, we won’t be using black pepper—but you might add some for more adventurous tastes.

Heat a saucepan, add the butter, and let it melt over low heat.

Add flour, garlic, and onion powder to be distributed evenly around the pan, stirring continuously. Cook for about 7-8 minutes until the color turns medium brown.

Note: be extra cautious since the flour tends to burn when overcooked or on high heat.

Give the pan a shake every couple of minutes so that the gravy covers the entire bottom of the pan.

Add ½ cup broth once the gravy turns to a dark and rich brown color. Turn to medium heat and allow it to simmer until you reach the desired thickness.

Stir in a tablespoon of butter at the end to add a shine, and then remove your gravy from the heat.

Serve hot with mashed potatoes or fried chicken, or jump to the serving section, where we talk about the best gravy pairings.

Once you start searching for the best KFC Gravy recipe, you’ll probably find a lot of variations. Everyone has their secrets and preferences that amp up the flavors of this world-famous gravy.

Although our recipe calls for simple ingredients, there are always a few things you can change.

We bet beer is the last substitute for beef broth you’d expect to see here. However, it is a common ingredient in soups, stews, and sauces because of is savory, rich, and nutty.

Besides, it will add both depth and color to your KFC Gravy. The alcohol will evaporate during cooking, but a nonalcoholic beer also works well.

Finally, a huge plus is that beer is even lower in sodium than beef broth, making it a perfect 1:1 substitute.

The mushroom broth is made by simmering mushrooms in water, creating a rich and deep flavor. The process takes no longer than 15 minutes, so you can make your own to replace the beef broth.

A mushroom broth has similar flavors and consistency to that of beef broth. However, add some soy sauce and fresh herbs if you want to amp the flavors. This is also one of the best vegan-friendly substitutes for beef broth. You never know until you try it!

What to Serve with KFC Gravy

Although no one will doubt KFC gravy does wonders on chicken, that doesn’t have to be the only option. This KFC recipe works well on mashed potatoes, soups, and pasta.

You’re missing out on a perfect opportunity if you haven’t tried gravy with pasta. KFC gravy works fantastically as a pasta sauce, especially with chicken pasta.

The best is to heat some of your gravy, swirl in some sour cream, and get your pasta under. But you can also coat your pasta in dressing once it’s cooked. One way or another, you’ll end up with a finger-lickin’ tasty dish.

Another gravy pairing to die for is a hot sandwich since it is the best way to use the leftover KFC gravy. All you need is to get some good slices of bread, top it off with hot cooked meat like roast chicken, and then add your hot gravy.

Or you could try chopping up some meat and any other stuffing you consider adding to your sandwich and mixing it with the KFC Gravy. Then heat it and spoon the mix onto a nice piece of bread.

Any hot sandwich works here, but consider using your gravy on a turkey sandwich—you won’t be disappointed.

How to Reheat KFC Gravy

Gravy works best when served hot since heat releases all the rich flavors it stores. So, you have to know how to do it the best way.

Reheat KFC Gravy in a Skillet

The key to reheating gravy is going low and slow. Low relates to the skillet’s heat and size—a large surface area allows the dressing to reheat evenly and gently.

The secret is to spoon your gravy into the skillet and break up any gelled sauce into easy-to-reheat portions. Other than that, stir continuously to allow it to heat evenly.

Reheat KFC Gravy in a Microwave

As with everything, a microwave is the faster way to reheat your KFC gravy. You must use a microwave-safe container—shallow in depth—and reheat the gravy in short 30-second bursts of heat, stirring in between.

How to Store KFC Gravy

If you plan on hosting a party or impressing your family with savory and rich gravy as an addition to some of your menu specials, it makes sense to make a large batch.

In this case, you must know how to store it properly to enjoy it the longest.

Store KFC Gravy in the Fridge

Unfortunately, gravy begins to separate when left for too long. So, you must refrigerate any leftover gravy promptly and use it within 2 days of cooking. After that time, you’ll have to bring it to boil for about 3 minutes to store for another 2 days.

Store your gravy in an airtight container, and you’ll be good to go.

Store KFC Gravy in the Freezer

To avoid separation, you must run your KFC gravy through a blender or food processor before packaging and freezing it. Then, spoon your gravy into freezer bags or airtight containers. It will store in the freezer for up to 4 months.

If left for longer, the gravy will significantly lose its quality. 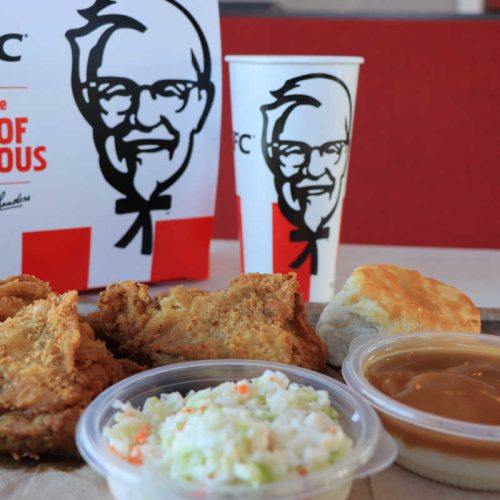 KFC Gravy is a magnificent elixir that combines all the flavors and complements anything—from fries and chicken to pasta and mashed potatoes. It is super easy to whip up and calls for simple ingredients that come together into a rich and savory side dish.
5 from 10 votes
Print Recipe Pin Recipe
Prep Time 5 mins
Cook Time 20 mins
Total Time 25 mins
Course Side Dish
Cuisine American
Servings 8
Calories 53 kcal
Equipment
Ingredients
Instructions
Nutrition
Calories: 53kcalCarbohydrates: 2gProtein: 1gFat: 4gSaturated Fat: 3gCholesterol: 11mgSodium: 148mgPotassium: 120mgFiber: 1gSugar: 1gVitamin A: 131IUCalcium: 1mgIron: 1mg
Liked This Recipe?Check Out All The Others We Have ➜