Asian food lovers, today’s the day we present you one of the most popular dishes in Asian cuisine—Enoki Mushrooms with a spicy kick of garlic.

Enoki mushrooms are one of the most delicate-looking mushrooms ever, with “Enoki” meaning “golden needle mushrooms” in Chinese. 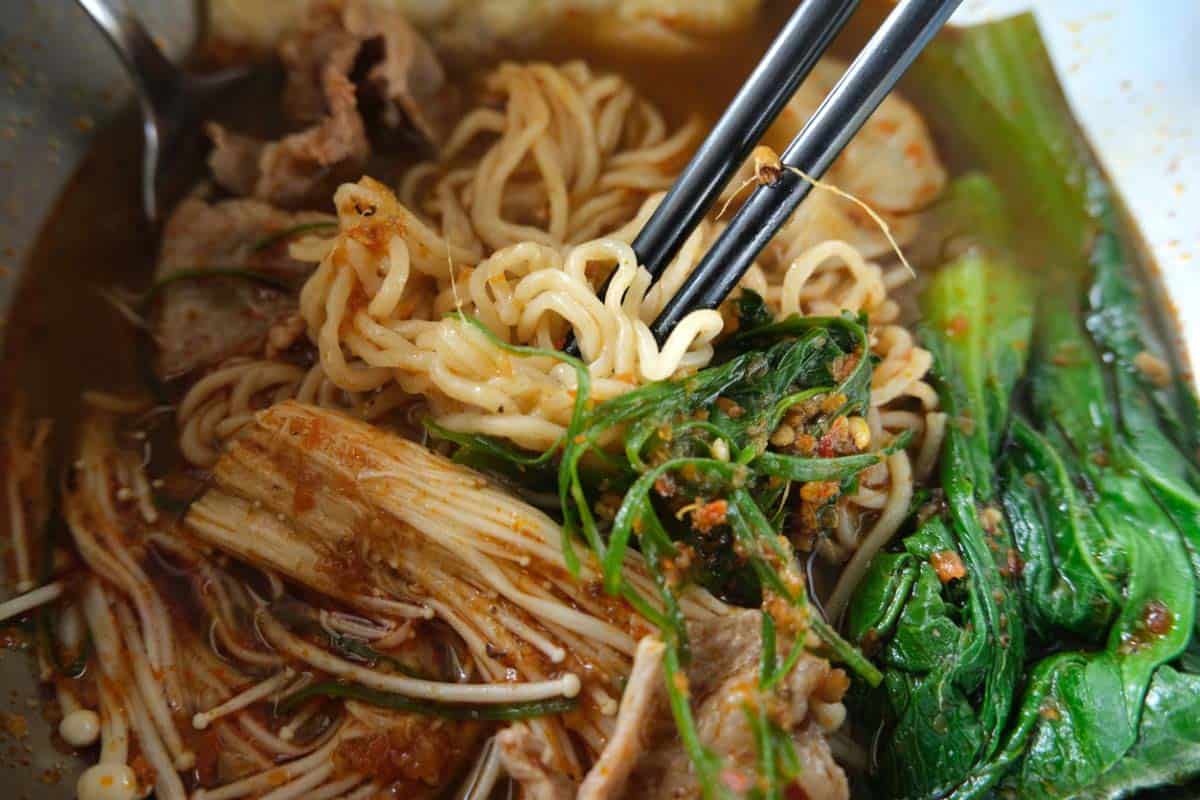 And the name fits here since these mushrooms look like a cluster of long white stems with tiny white caps on top.

So today, you’re going to make these fantastic mushrooms at home with this Spicy Enoki Mushroom recipe for a perfect Asian dinner.

How to Make Spicy Enoki Mushroom

Unlike many other popular Asian mushrooms, like king oyster or shitake, the enoki mushroom has a relatively mild flavor with a slightly fruity taste.

However, what makes it stand out is the crunchy texture, rare in the mushroom family.

Besides, enoki mushrooms are good at attracting flavors from the spicy sauce, thanks to the slim stems.

That’s why this Spicy Enoki Mushroom recipe will be truly unforgettable.

All you need is to find the enoki in your local Asian store.

These mushrooms usually come in vacuumed plastic bags and are stored in the chilled food section.

Note that good-quality mushrooms have an off-white color and feel firm when pressed. So don’t go for any less than that.

If you’re a fan of spice and lots of garlic but are unsure if Asian food is for you, this Spicy Enoki Mushroom recipe is the best way to start.

Simple to make and easy to scale up, these addictive spicy mushrooms will become your go-to recipe for any occasion.

Since enoki mushrooms have a relatively neutral flavor, they are the perfect vehicle for any sauce like a spicy hot pot meal.

But the real secret here is the garlic.

We’ll be using both garlic cloves and chives.

Garlic chives, also known as Chinese chives, have a distinct garlicky flavor but are not as sharp as raw garlic.

When cooked, it will all mellow to a sweet taste, making these enoki mushrooms irresistible.

Wash them in a large bowl of clean water and drain with a paper towel.

Mix the garlic and Thai chili in a small heatproof bowl.

Then, heat the oil in a medium skillet over medium-high heat until simmering, and pour the hot oil over the garlic and chili.

Place the skillet back on the heat and add half of the enoki mushrooms in one layer.

Then, add the chives and the rest of the mushrooms.

Pour the sauce mixture over the mushrooms, cover with a lid, and bring to simmer for about 1-2 minutes.

Serve immediately once the enoki mushrooms are wilted.

But if you want to taste the famous Asian mushrooms without much heat, substitute a few ingredients for a milder result.

While there are plenty of Thai chili substitutes ranging from spicy to mild, none works better than the jalapeno peppers.

The heat level in jalapenos is significantly lower, while the texture is similar to that of Thai chili.

If you want to reach the illusion of authentic Thai chili, you can put the jalapenos in a food processor so that there are no large chunks.

Keep the seeds for relatively mild heat; otherwise, you can remove them.

While fish sauce is not the perfect oyster sauce substitute because of the liquid-like consistency, it is still a great alternative to consider.

It’s made by coating small fish in salt, letting it marinate and release a salty liquid.

Obviously, it has a fishier taste, rather saltier than sweet.

But it may work even better, considering the hints of the sweetness of the enoki mushrooms.

Worcestershire sauce is made from a fermented blend of ingredients like anchovies, salt, vinegar, spices, and sugar.

It is a little less umami and tangier than the soy sauce. Still, it is the best substitute for this recipe.

Besides, Worcestershire sauce doesn’t have as much salt as soy sauce, so you can freely substitute both light and dark soy sauces.

What to Serve with Spicy Enoki Mushroom

Since Spicy Enoki Mushrooms are a classic Asian dish, it makes sense to serve them on the side of some other Asian staples.

However, pair it with some traditional kitchen dishes for a more exciting effect.

No ideas? We’ve got you covered.

What about your favorite soup du jour?

Our absolute favorite is a classic onion soup which feels wonderful on the side of anything, spicy enoki mushrooms being no exception.

It is one of the easiest and simplest soups to make.

You can make it with chicken, onion, and herbs or whip up a batch of French onion soup with beef and veggies.

And the spicy crunch of Asian mushrooms will provide a nice contrast to the creamy soup texture.

You can serve spicy enoki mushrooms on the side of a steak for a more filling meal.

Plus, you get multiple flavors and textures simultaneously, so why not?

Just bring out the chef in you and start experimenting.

But make sure to buy a tender piece of meat. Something like beef tenderloin, flat iron, or sirloin will work the best.

You don’t have to worry about side dishes if you have potatoes at home.

Creamy mashed potatoes will go well with anything, no exception to these spicy enoki mushrooms.

It will satiate your hunger, and enjoy the combination of textures and flavors.

Having mashed potatoes on the side will be perfect, whatever variety you like.

How to Store Spicy Enoki Mushroom

Apart from being crunchy before cooking, enoki mushrooms are very tender once cooked.

So, storing them requires extra caution to prolong their shelf life.

Note that storing cooked enoki mushrooms in the fridge will preserve them for only 1 week.

So, use this method only if you’re 100% sure you’ll eat them within a week.

Let them cool to room temperature and store them in an airtight container.

As we’ve told before, crispy enoki mushrooms are very tender once cooked.

So, freezing them is not recommended.

However, if you have to, use a freezer-safe bag. It will keep them fresh for about 10 months.

Then, make sure to thaw the cooked enoki mushrooms in the fridge and not on the counter since they will turn soggy. 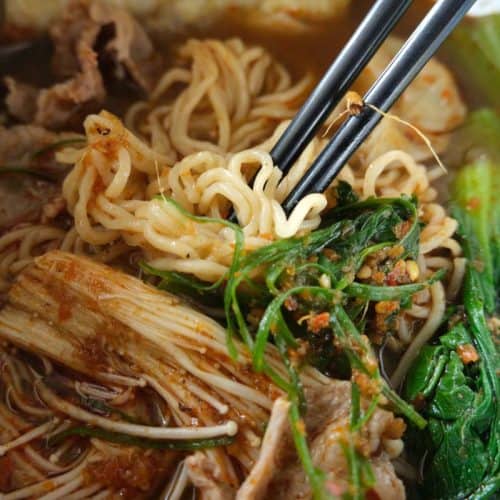 This Spicy Enoki Mushroom recipe is one of the best ways to kick off any Asian dinner or just diversify your weeknight meal. Crunchy enoki mushrooms turn out tender and savory in under 15 minutes. Give it a try today and serve it on the side of your favorite rice or meat dishes.
4.92 from 12 votes
Print Recipe Pin Recipe
Prep Time 5 mins
Cook Time 10 mins
Total Time 15 mins
Course Side Dish
Cuisine Japanese
Servings 2
Calories 111 kcal
Equipment
Ingredients
Instructions
Nutrition
Calories: 111kcalCarbohydrates: 23gProtein: 8gFat: 1gSaturated Fat: 1gPolyunsaturated Fat: 1gMonounsaturated Fat: 1gSodium: 841mgPotassium: 852mgFiber: 6gSugar: 2gVitamin A: 889IUVitamin C: 19mgCalcium: 45mgIron: 3mg
Liked This Recipe?Check Out All The Others We Have ➜